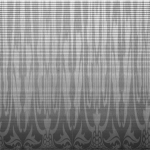 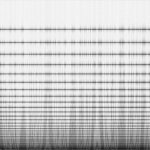 Binary was originally created as a site-specific commission for the exhibition Fresh Interventions at Oxburgh Hall, a Tudor manor house in Norfolk, UK, 14 Apr – 28 Jun 2007.

The work is inspired by the venue’s Victorian wallpaper. Computer software was used to convert a photograph of the wallpaper into sound, which was digitally edited and processed to produce a haunting atmospheric soundscape. The sound was also transferred back into images printed onto canvas, ghostly echoes of their origins.

By converting a static visual image into the time-based medium of sound, this work plays with notions of stillness and movement. The immersive textural character of the sound is representative of the stillness of the image, yet its subtly shifting quality lends it a sense of motion. The faded condition of the vintage wallpaper, its signs of wear and decay, are reflected in the grainy, eroded nature of the audio. The work is at once an exploration of a frozen moment and of the relentless processes of time, loss and disappearance.